For use with 35mm film, a circular fisheye would typically have a focal length of 6mm to 8mm; and a full-frame variety would typically be 15mm to 18mm. The 12mm fisheye, however, falls in between. The image it forms on a 35mm frame is neither a complete circle nor a full rectangle. These simulations show the results that each type of lens would produce when shooting the same scene from the same camera location:

I suspect that the 12mm fisheye never really saw a lot of use in the heyday of film, and I'm not sure what the advantage of its image circle was thought to be. Aside from the example I mentioned above, I don't remember seeing many published photos showing a circle with its top and bottom cut off. The photographer would have had to crop the image to make a rectangular print, and thus lose a good portion of the usable film area.

In the current world of small sensor digital SLRs things are a bit different. Today's most popular DSLRs (like my Konica Minolta 5D) have a sensor size of about 24mm x 16mm, commonly referred to as APS or APS-C. To produce a proper 180 degree full circular image on these sensors, we would need a lens with a focal length of about 5mm; and to produce a full-frame image we would need a lens of about 8mm to 11mm. Only a few years ago such lenses were somewhat rare. I believe that Nikon offers a 10.5mm full-frame fisheye for their APS cameras, and Pentax has a very odd 10-17mm zoom fisheye for their own mount. Tokina also offers a similar 10-17mm zoom fisheye - but in Nikon and Canon mounts only. Recently Sigma introduced an autofocus 10mm fisheye for all major camera brands, and Samyang now markets a unique manual focus 8mm fisheye under their own brand name and several others. There are also some 8mm fisheyes from companies like Peleng that can be adapted for use on Minolta and Sony cameras. But they're manual focus, manual aperture lenses, and are not capable of covering the entire APS frame.

One other way to go is to use any of several 15-17mm fisheyes, which are easy to find. However, their image circles are far too large to retain a real fisheye effect.

So, what might we expect with all these focal lengths? Compare these APS results to those seen on a full-size 35mm frame:

On an APS sensor, a typical 8mm lens produces the same type of partial circle that the 12mm lens produces on a 35mm film frame. (The Samyang 8mm mentioned earlier is an exception, and it does nicely cover the APS sensor.) But notice that the 12mm lens provides a pretty close fit on an APS sensor. Its image circle is a bit too big (remember that something between 8mm and 11mm would be more correct), so some of the available image is lost. Instead of seeing 180 degrees across the corners, we can only see about 150 degrees. But hey, it could be worse! Compare this to the heavily cropped result obtained with a 16mm lens.

The oddball 12mm fisheye offers an acceptable match of image circle to APS sensor size and is also the most affordable choice out there. I've been able to snag a few of these from eBay for between $60 and $80 each, shipping included, although typical prices are in the $100 to $200 range.

By the way... if you have a DSLR with a 1.25x or 1.3x crop factor (like some Canon models) this lens should produce a nearly perfectly sized image circle for it; but I'm not able to test that capability.

I was very surprised to discover that there are actually two distinct variations of the 12mm fisheye! This is not readily apparent unless you happen to have both types on hand to compare, as I do. The difference lies in the assembly that holds the front elements. There is a small version and a large version. The photos below show this difference.

Both of these lenses bear the Accura brand and the small version has a lower serial number, suggesting that it was the earlier design. However, the front element of the small version appears to have more advanced coating - and that suggests the opposite. Regardless of which came first, my tests indicate that the large version is optically better. In spite of its coating, the small version provides inferior contrast and flare control. It also covers a slightly smaller field of view. Its only advantages are the smaller size and weight.

There's one more difference. Based on photos in a number of eBay auctions for the two types, it appears that the small version is always accompanied by a domed lens cap, and the large version always comes with a two-piece cylindrical cap. The rear sections of both lenses appear to be identical.

There are three aperture settings: f/8, f/11, and f/16. But there is no adjustable iris. Instead the lens employs a type of 'Waterhouse stop' system - a pivoting disk with three holes of different sizes. I suppose this must have saved money on construction costs.

The maximum aperture of f/8 makes this one of the slowest fisheyes (indeed, one of the slowest 35mm lenses of any type) that I've seen. Again, that probably was a necessary decision to keep the price down. But surprisingly, this has not been much of an issue. I leave the lens at f/11 pretty much all the time, and rarely have any difficulty composing shots with it. Since there's never a need to focus, the viewfinder image doesn't have to be very bright. I just set the camera to A (or sometimes M) mode and I'm good to go.

I'm sorry to say that the manufacturer has perpetrated a little white lie about the lens. Despite the markings on the front ring of some versions, it does not cover a 180 degree field of view. This is easy to confirm visually by pointing the back of the lens at a light source and looking through the front while rotating the lens until the aperture is no longer visible. With a true 180 degree lens the aperture would have to remain in view until the rim of the front element is rotated exactly 90 degrees away from your eye. Instead, the aperture becomes blocked before that happens.

Another unusual aspect of the lens is that it's made to use a T-mount or T2 adapter. There's really nothing wrong with this idea, since it permits the lens to be easily adapted to a wide variety of camera bodies; but I'm pretty sure there were very few if any competing fisheyes that took the same approach. Interestingly, this is one of the characteristics that makes the lens particularly attractive to today's photographers.

As mentioned above, attaching the lens requires a T-mount or T2 mount for your specific camera. The difference is that a T2 mount has an inner ring with the screw threads and an outer ring with the lens bayonet, allowing rotation of the lens within the mount to achieve correct alignment on the camera. Something to watch out for when buying a lens like this with a mount already attached is that the mount or its inner ring might be frozen to the lens. It's also important that the mount is properly built and attached. An error of a fraction of a millimeter forward or back can dramatically impact the focusing ability of this lens.

The lens employs a fixed focus design, which is not unusual for a fisheye. Depth of field is tremendous, ranging from about 1 foot to infinity depending on the aperture used. Close focusing is not as good as with some other fisheyes, but there are workarounds for that. You can simply unscrew the lens from its mount slightly, which will move it forward for closer focus. Another approach requires a hair tie or a thick rubber band, although a black O-ring of the right size would probably work (and look) a little better. Slip it onto the lens as shown. Then carefully position the lens flush against your camera mount and hold it there while you shoot. This simple 'close focus ring' positions the lens forward just enough to provide perfect focus for objects that are almost touching the front element:

What About Image Quality?

One More Thing to Try

Another fun thing you can do with PTLens or similar software is to 'de-fish' the fisheye image to obtain a rectilinear perspective. The results are not as good as you'll get with a real rectilinear lens, but are still okay for many purposes. Here's another look at the office scene comparing the unedited fisheye image, a de-fished fisheye image, and the version shot with the Konica Minolta 11-18mm. 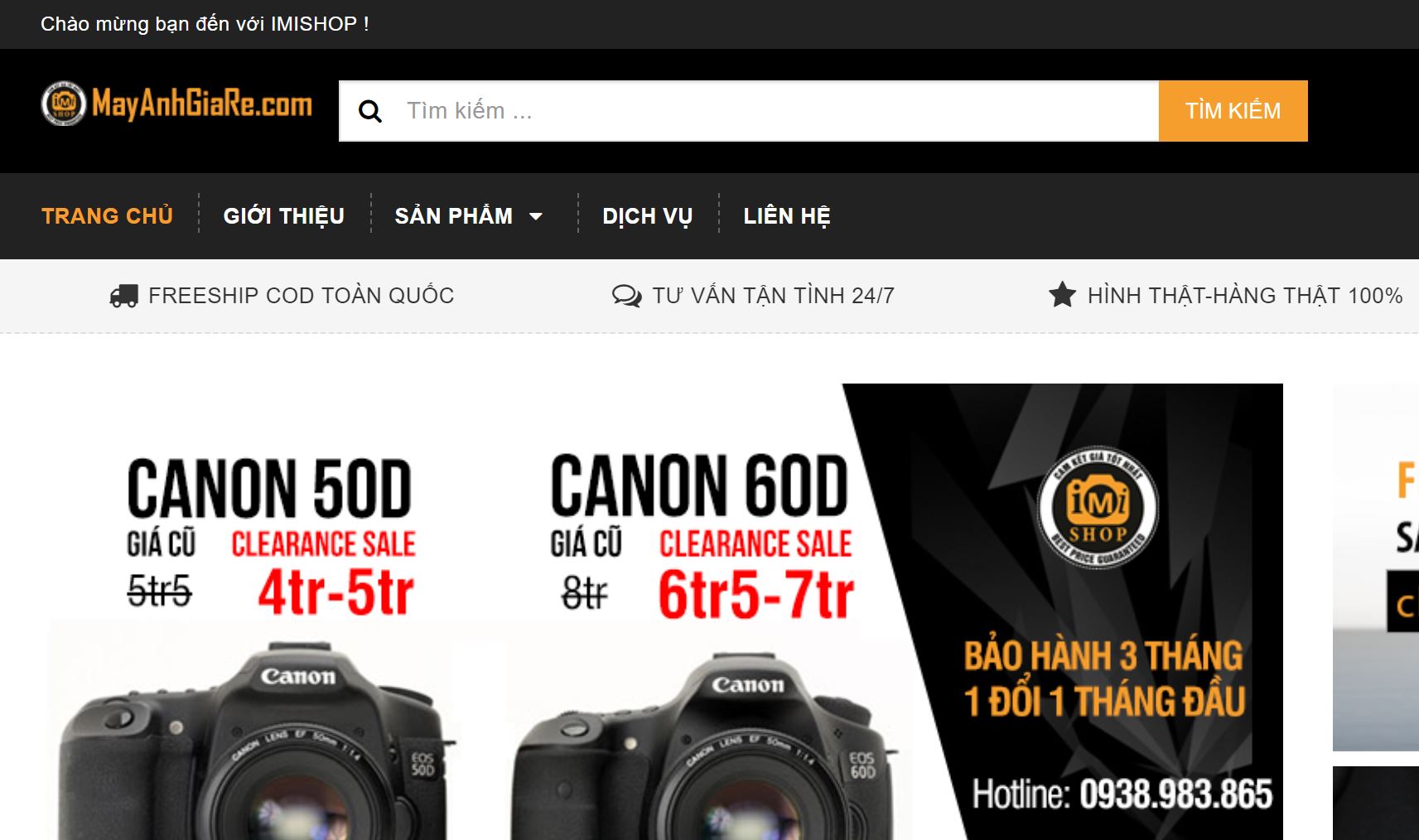 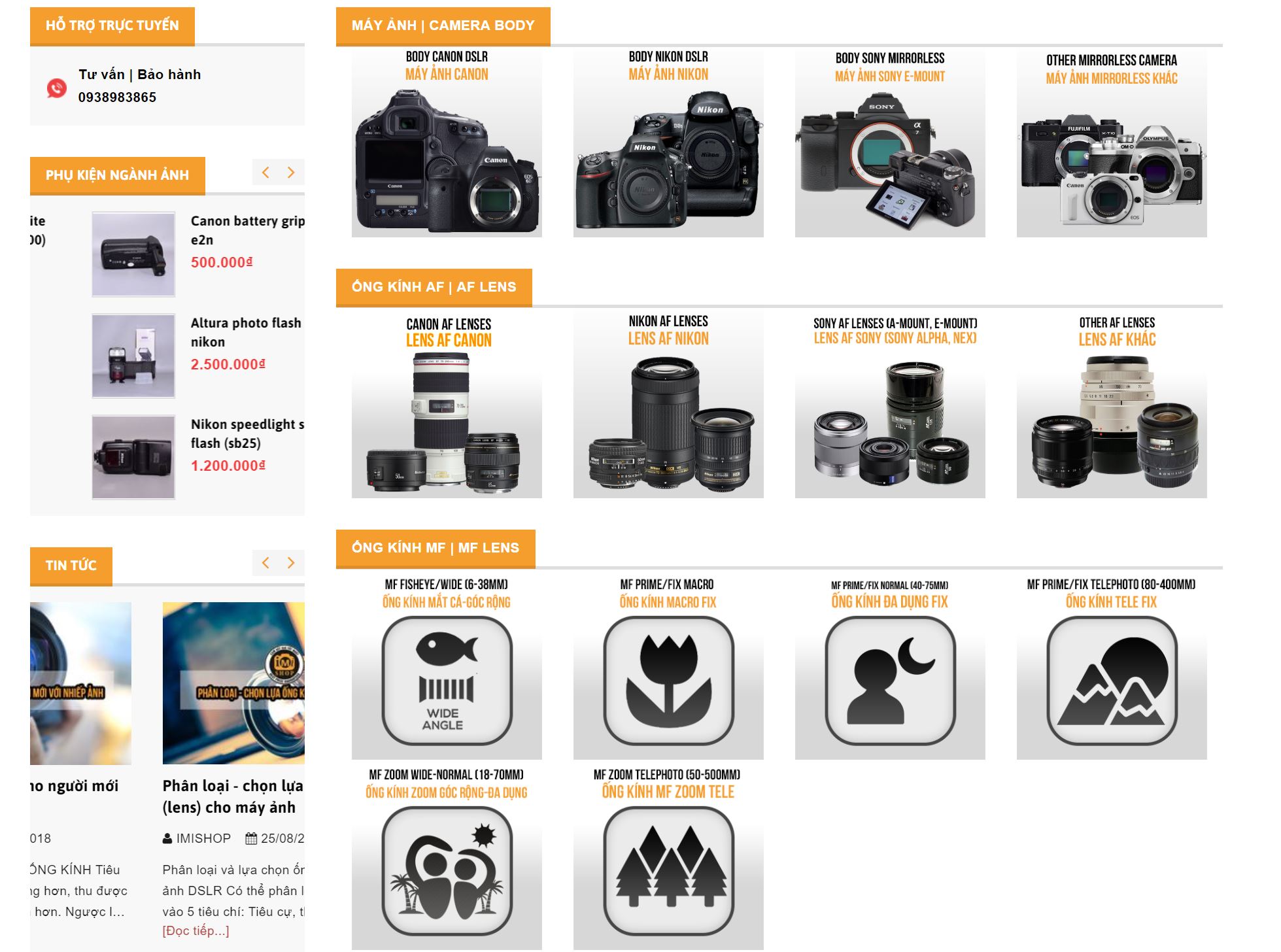 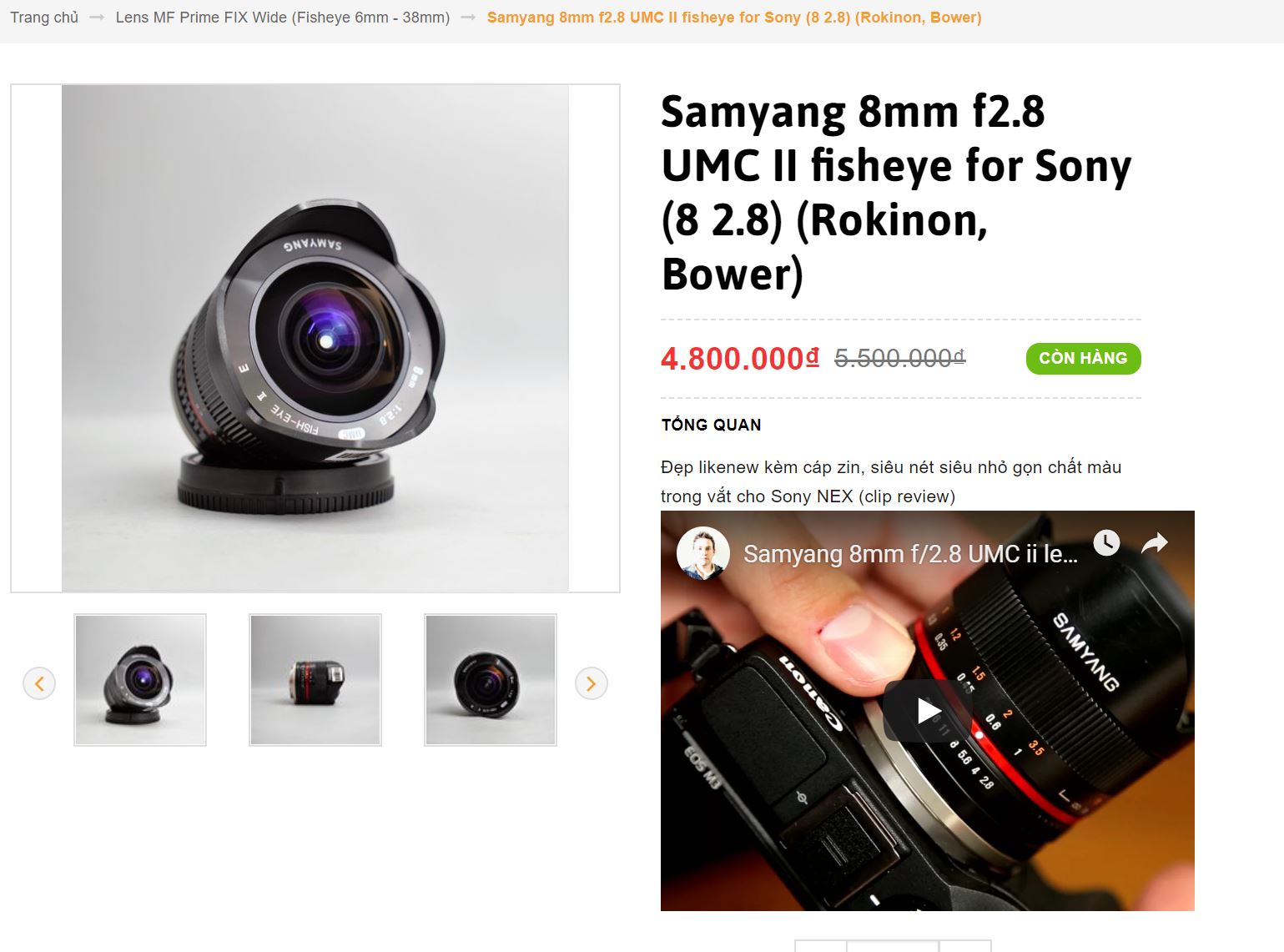 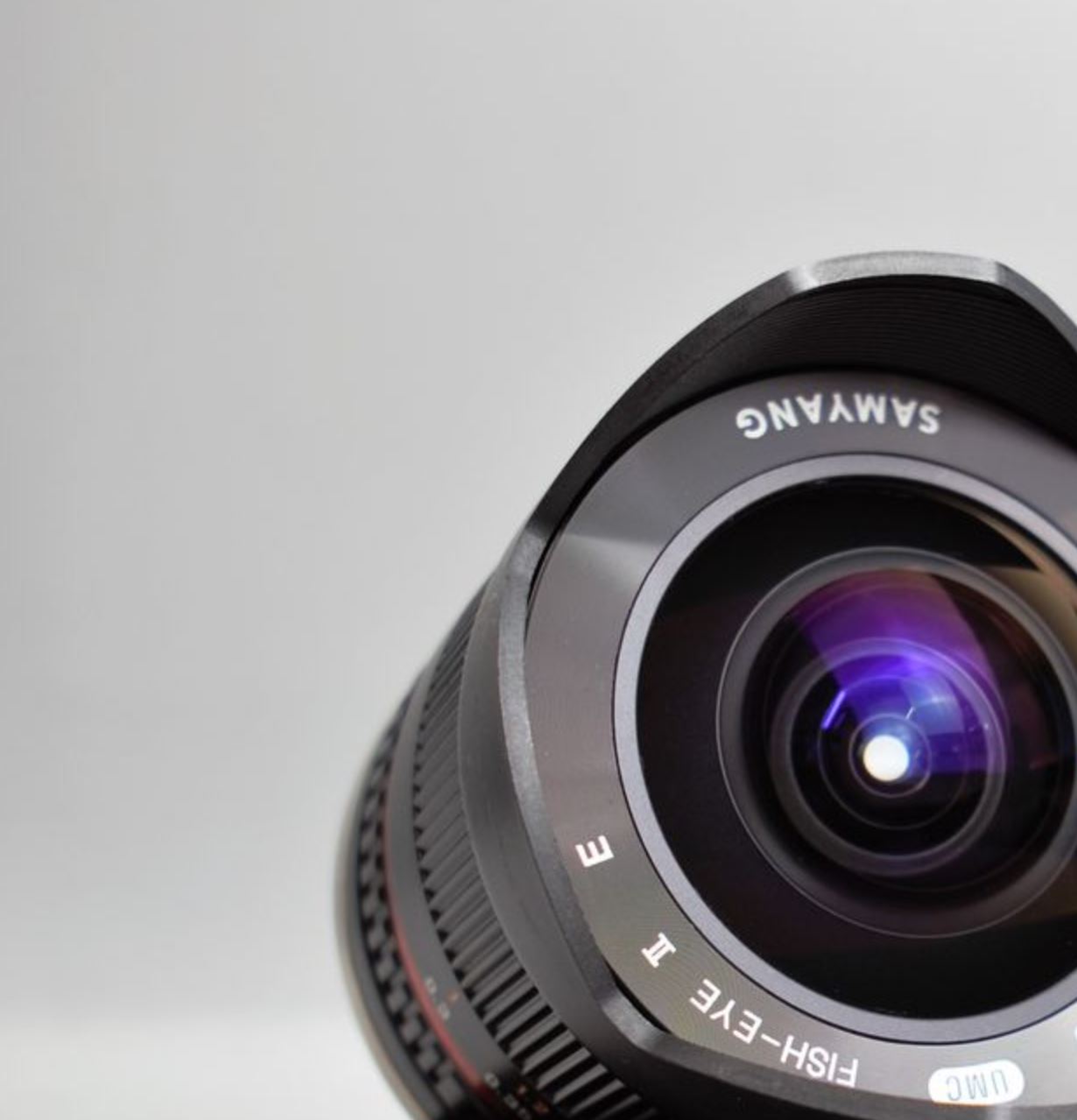